Unlike the majority of consumer products, consoles tends to peak with the initial release. The first generation Playstation, PS2, PS3, Genesis and Master System were all superior to the cost reduction models that followed them. Indeed the NES, while possessing composite output, lacked the disk system support and FM sound provided by the original Famicom. The top-loading NES-101 dropped the composite out, resulting in a machine with only RF output and none of the Famicom’s extra feature set. However the top-loading AV Famicom (the HVC-101) kept the extra FM sound of the original, along with the Famicom Disk System support missing from the western machines, and added composite out via a SNES style AV connector (hence the name). The question is, does the AV Famicom’s composite output match up to the excellent video produced by the NES?

The first problem with testing this is the available hardware. I’ve got an original (RF only) Famicom, an AV Famicom and a UK NES. Unfortunately while the NES has had its region lock removed, it runs at a resolute 50Hz and has the usual PAL squashed visuals. By comparison the AV Famicom outputs NTSC at 60Hz and fills the whole screen. This makes direct comparisons trickier than they should be.

The second problem is capturing the output from 240/288p consoles. Most capture card, like most modern televisions, don’t really like the non-standard that is 1980’s progressive video. The solution I chose is to use the same hardware I use for view the consoles on an LCD TV: the mighty XRGB Mini. This is upscaling the video to 720p (at either 50 or 60Hz) and forwarding it on to a Hauppauge HD PVR2 for capture. While this isn’t a true representation of the consoles’ output, it is a true representation of what I actually see on the screen when using either console. The HD PVR2 is adequate for the task. It produces some compression noise on sharp pictures but it is at least immediately recognisable as not being from the original source.

Below are screen captures from identical moments in Super Mario Bros, Contra and Gradius. Click on the images to see them at full size. The AV Famicom (NTSC) output is on the left, NES (PAL) on the right … 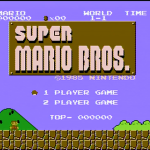 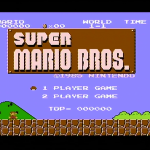 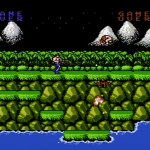 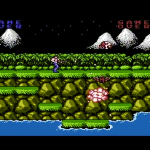 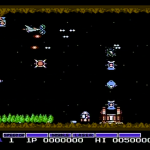 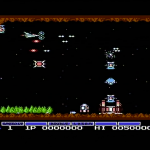 Aside from the expected vertical compression on the PAL images; the most obvious difference is that the colours are clearly different. This is down to the differences between NTSC and PAL colour encoding. NTSC output is – as you might expect from a system originally designed for that standard – much closer to the “true” NES palette. However the NES image is sharper (though this is obscured slightly by the compression artifacts introduced by the capture device) and there’s less colour noise (the best example being the mountains in the Contra image).

Above are two zoomed images of Contra and Super Mario Bros (NTSC left, PAL right). The compression noise is fairly bad on the Mario image but it’s clear that the AV Famicom output is softer and less sharp than that from the NES. The background in Contra is is much better defined on the NES.

Below are a couple of video comparisons. In both cases the AV Famicom output is on the left, PAL NES on the right. Both are from the attract modes of their respective games and show identical output. However the faster frame rate of the NTSC video means they are out of sync.

The movement hides many of the differences, but the NES output is definitely sharper and doesn’t have the same degree of colour fringing. However the crisper picture doesn’t really out weigh the crippling slowness that affected all European consoles prior to the 32bit generation. Whether the NTSC NES would combine the best of both worlds is a question that will have to remain unanswered for the time being (until I manage to find one for sale in the UK).